When we do a research, we also want to study thevery important part of the landscape, its history. The landscape has a memory. Do not believe?
We went through the orto-photos of the Mokrá quarry and we noticed many interesting things there. Forest – the central theme of our project Quarry Life Award in 2016 – Is one of the last small green islands in a sea of stones. From the perspective of the past, this forest (mostly oak-hornbeam forest) was much bigger. Even in the late fifties, in Mokrá quarry was only tiny shards in the map. Today it is the opposite! The mining area is dominated.
You can see the figures on the current situation and status in the 1953. It is interesting that the lines of the forest are still preserved. Following extraction narrowed it down to a "long" noodle. Only mining-route connecting central and western quarry broke the forest. Nevertheless, we can see some continuity. This tiny stripe of the forest will be preserved which is quite good, with respect to its biodiversity hotspot and seed bank potential (e.g. there are several endangered plant species, like orchids Cephalathera rubra, Cephalanthera damasonium or Epipactis heleborine).
A similar problem will soon be in the northern part. The company is going to unite two quarries. Our task is to design a gentle restoration of the excavated part of nature. When someone will look at an orto-photos in a hundred years, we hope that he will see well preserved continuum of the landscape memories. 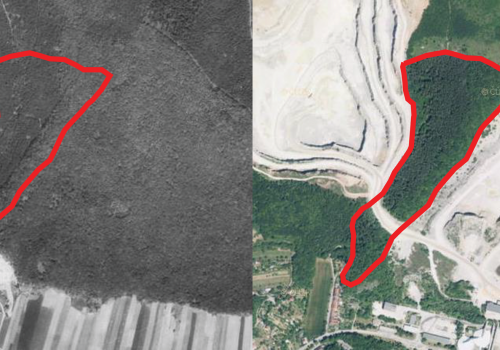