Eagle Mills Sand & Gravel Plant is currently temporarily inactive and produces construction sand and gravel.  It is a rail-connected operation and supplies construction materials to projects regionally ranging from major highway construction, repair and maintenance to local building projects.  Plant is located ~7 miles northeast on Highway 79 of Camden, AR which is County seat for Ouachita County.  Area is predominantly rural with half-timber and half manufacturing with some tourism. The landscape of the area is rolling hills.

The 2,232.83 Acre sand and gravel open-cut mining operations at this facility have been in operation since 1980s and utilize draglines (historically) to remove an average of 15 feet of sandy overburden to uncover an average 15 foot layer of siliceous sand and gravel. The overburden is cast back into the previous open cut where the sand and gravel has been removed. Generally, the 120 ft. wide open cuts are oriented lengthwise and utilize conveyor systems to move raw materials into the plant site area for processing.  622 Acres of the mined out areas have been fully reclaimed and 1,016 Acres are yet to be mined at this facility.

Topography of the Site is gentle with Mizzell Creek flowing northeast to southeast draining into Ouachita River.  Native soils in the area are mildly acidic to strongly acidic and are low in fertility. Permeability is moderate and available water capacity is low.  Runoff is medium to rapid creating severe hazard for erosion. Soils are difficult to till and response to fertilizer and lime is poor to moderate.  Fine silt materials have a strong tendency to stay suspended in water once entrained.  These natural conditions present significant challenges to concurrent reclamation and water quality management.

The mining plan for this site includes safeguards for unpermitted releases of water by recirculating all Process water. The production process separates and accumulates a fine fraction of sand and clay sized particles which are collected in settling ponds. Topsoil is stockpiled adjacent to and outside of the current mine areas for placement upon the 1:3 sloped banks. Reclamation is and will continue to be contemporaneous with mining as the reclamation progresses northward and then westward, following the advance of the open cut. Banks of the pit are sloped as mining progresses and at any given time, the only unsloped banks are those immediately adjacent to and along the open, active cut.

The mined area will be reclaimed to ponds, grasslands and forested areas. The majority of the reclaimed areas will be ponds. Local USDA recommended native grass varieties will be planted on affected lands and sloped banks of excavated areas at approved rates of coverage. Some forested areas that are within the permit area may be left as forest.

Eagle Mills is located in the Southwestern Coastal Plain area of the State of Arkansas. According to a 2002 report by NatureServe, Arkansas was ranked 19th in the U.S. for species biodiversity.

Ouachita County was formed in November 1842, from part of Union County and named for the river running through it. In the Choctaw language, the words "owa" and "chita" mean "big hunt." From that came Ouachita. It was the river that enticed a French trapper to establish a trading post that would become Camden, the county seat. Once heavy steamboat traffic linked Camden directly to New Orleans and other important cities. The county's economy is about half-timber and half manufacturing with some tourism. The landscape of the county is rolling hills, largely forested. Outdoor recreation abounds with hunting, fishing and water sports. 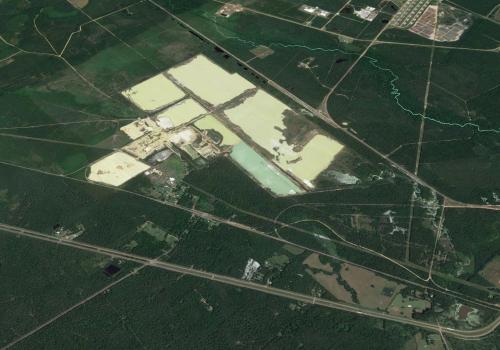